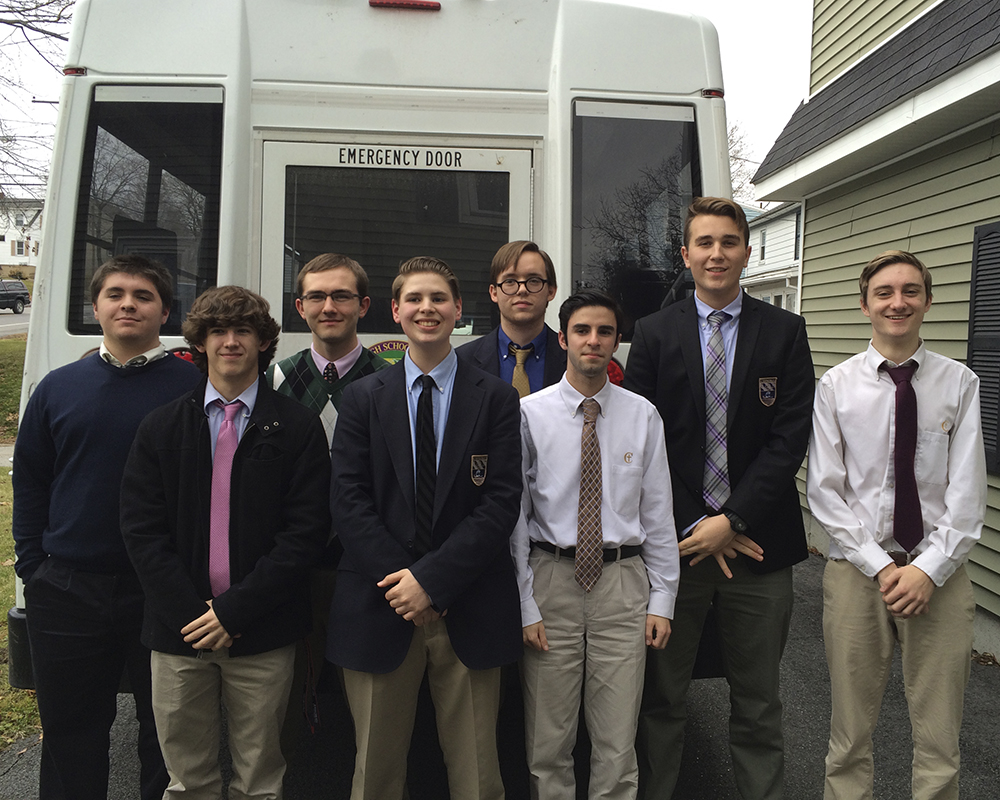 In my early days as an assistant engineer, I worked a lot of jingle sessions, setting up and recording large bands in a span of a few hours. The head engineer taught me a valuable lesson, that for these sort of sessions, all that mattered was that they sounded clean and professional, and were done in the allotted timeframe. To this end, knowledge of expedient mic placement was a necessity.

So, In 2014 I was contacted by Ruth Summers at Cheverus High School in Portland. They wanted to record their student jazz band for use in some radio advertising, and of course I was up for the project. When band director Chris Humphrey arrived with the band I found there were 6 of them – guitar, bass, drums and three horn players. Pretty straightforward session – I set up the rhythm section and tracked some short song snippets with Chris directing the players. The kids worked fast, and once that was done, the rhythm section broke down. I then set up the horns with a stereo pair of ribbon mics and tracked them easy peasy. All parts tracked in under 2 hrs. (Basically a take without a mistake was considered adequate and they moved on.)

It was at that point that i found out why they were working at such a breakneck pace: They only had access to the school van for 2 hrs, and had to get it back to Cheverus. I mixed the tracks a few days later, sent them off for mastering, and that was the end of it.

Fast forward to 2015: I am again contacted by Ruth Summers about another session for radio ads. This time there would be 8 kids coming – a keys player had been added, and there were two drummers who would perform on one song each. Again, the session would be 2 hrs tops. I also found out that they needed finished tracks in 2 days, and to give the mastering engineer time to do his thing, I would have to mix them that night and get approval in the morning.

This left me with little or no time to think about things like various mic placements, sculpting a sound, etc. I just placed the mics where experience told me they would sound the best with the least fuss. Upon throwing up the faders, everything sounded “workable”, so we commenced.

Again the kids (who were a very nice and polite bunch) blew through tracking, and went on their merry way. After dinner I returned to the studio to mix, threw up the faders, and listened. Turned out my “workable” mic placement was more dead on that I expected – these tracks were pretty close to read to go. Some compression here and low pass filtering there was needed, but otherwise the tracks sort of mixed themselves, or I should say, good mic placement made for minimal fuss during mixing. The only obstacle was compensating for the different drummers (one hit a lot harder) but all in all it was an easy mix session. Mixes were approved the next morning and sent off to mastering, and my work was done.

Sometimes you shouldn’t think about it – you should just do it. If you have a project with a tight timetable, we can accommodate it. Please feel free to call or email us to discuss the project.