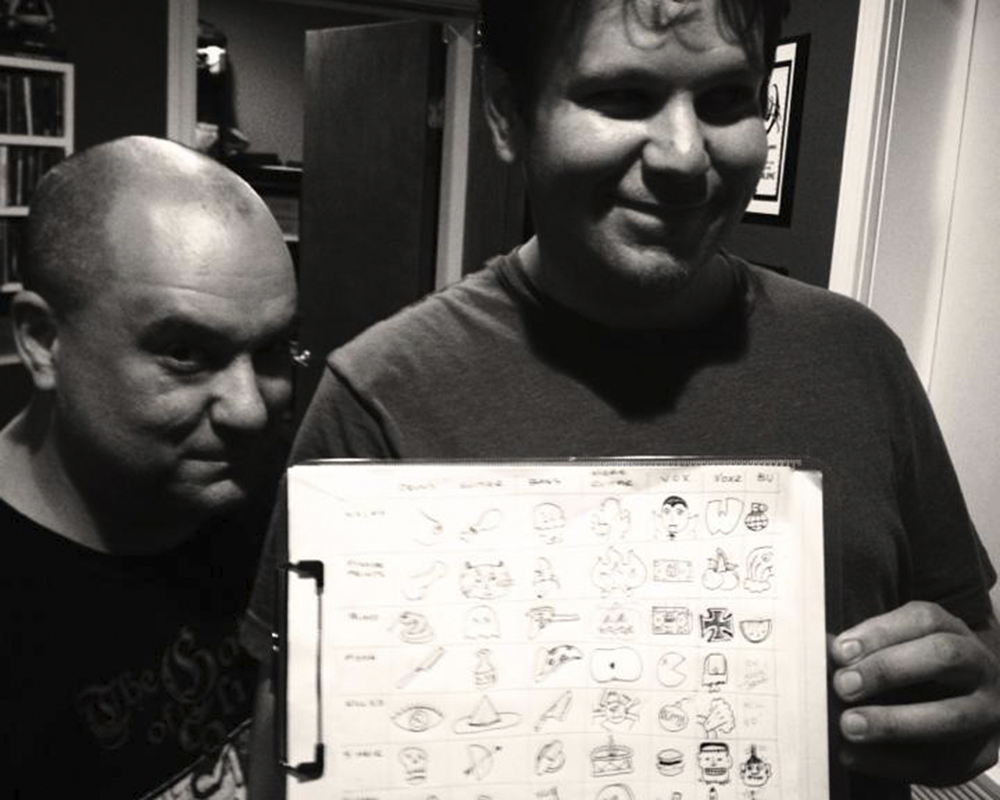 Of all the band’s that I have seen in Portland Maine, only two stand out to me as having “that special something” – the kind of musical magic that separates good bands from great bands. One is now-defunct doomsters Ocean, and the other is probably Portland’s best punk band, Covered in Bees. Covered in Bees, well, they just got it. Great (and surprisingly complex) tunes, furiously played by 4 guys that really have musically connected with each other. Anyone who has seen them would certainly agree (I would think), and I don’t deny that I’m a big fan.

So, I was thrilled to receive a message from CIB frontman Boo about the Bees coming to Garage Mahal Recording Studio to record and mix their new LP, Corpse in the Mattress Motor Lodge. It’s sort of an audio play about a band on tour who find a corpse in their motel room. 14 new songs would be interspersed with snippets of dialog, sort of like an old radio show. I’d handle recording and mixing the songs, and they would take care of the dialog.

Recording the first 7 songs began in March, and the boys had an “optimistic” plan to get these songs completely tracked in 8 hours. Needless to say I was skeptical, but agreed to the schedule, being fully prepared that it would in reality take longer.

So, the Bees arrived bright and early on a saturday in March, ready to go. Drummer Tristan set his drum kit up in the main room, and guitar and bass cabinets were placed in the booths to eliminate leakage. Patch-thrus in the walls permitted Ed (bass) and Doug (guitar) to play in the main room with Tristan. Boo oversaw things from the control room.

One thing about the Bees that I have taken issue with in the past was their lack of a good guitar amp. Despite his prodigious playing ability, Doug’s usual amp merely sounds ok, and live he’s at his best when he borrows an amp. (I was fully prepared for him to use any of the amps that we have here at the studio.) Lo and behold, he arrived at the session with a Genz-Benz head and matching 2×12 cabinet (which actually belonged to Tristan.) Upon plugging in, we were met with a thick grind that still maintained enough clarity for complex chords to ring out. The amp really did sound great.

Once setup was done and sounds gotten, tracking started. The Bees proceeded to prove my skepticism about recording 7 songs in 8 hours was unfounded as they plowed through songs, and with one exception, every first take was a keeper, totally on the money. Yes, they were THAT well rehearsed. I actually found the pace a tad unnerving, as I kept expecting it to fall apart somehow, but it didn’t. They had basics done in 3 hours.

Doug then proceeded to overdub a 2nd set of rhythm guitar tracks to fatten up the stereo spread, and he got those done in less than an hour. again, all first takes, and his timing was pretty impeccable. After a few other guitar overdubs, he was done.

Vocals were next. Boo’s big personality onstage certainly came though in the recording, and he proceeded to lay down keeper takes the first time around with only a few touch-ups in spots. He didn’t even warm up – he just laid it down right on the first pass, alternating between a Danzig-esque croon and howls of rage. Doug added some equally raging co-vocals, again without warmups and mostly first takes.

Group vocals were fun: all four guys crowded around my Shure KSM-44 vocal mic set to omni pattern, and this was quadruple tracked and spread evenly across the stereo spectrum. In the end, 4 vocalists sounded like 50.

And seemingly in a blink of an eye, we were done. After discussing mixing (which I would do myself), the guys packed up and split, and I was left amazed and refreshed that a band could lay down hi-quality tracks that quickly. Just goes to show how important rehearsal is!

After taking a break for the project for a few days, I started mixing. I planned on mixing one track and then would send it off to the band members for feedback/changes. I selected “God Damn the Queen” partly because it’ just fun to listen to, with it’s chants of “the kraken! the kraken!” and “Yo-ho! yo-ho!” Truth be told, beyond EQing, light compression and fader balancing, the track sort of mixed itself. The tones and performances were so good in the first place that not much else was needed.

Upon review, Boo commented “it sounds like how I hear the song in my head” (quite the compliment!), and the guys gave me the go-ahead to continue with the other 6 songs, which went down as easily as the first. Driving around with the mixes for a few days revealed only a few needed tweaks. Upon further review from the band, their only comment was an overall “less vocals & more guitar”. I assured them that that would automatically happen in the mastering process and that I had mixed them intentionally with that in mind.

I was then given the go-ahead to send the tracks to mastering engineer Scott Elson (who in fact mastered By Blood Alone’s Seas of Blood LP.) There was some debate as to whether Scott should master the 7 tracks now or wait until the other 7 were recorded and master all 14 at once. For now, he mastered one track, “The Coffee Song”, and it sounds monstrous. Good job Scott!

These sessions were a glowing endorsement of being well rehearsed and having good gear. It definitely leads to a smooth and fruitful recording. Tracking of the next 7 songs for the LP will begin in June. Looking forward to having the guys back.