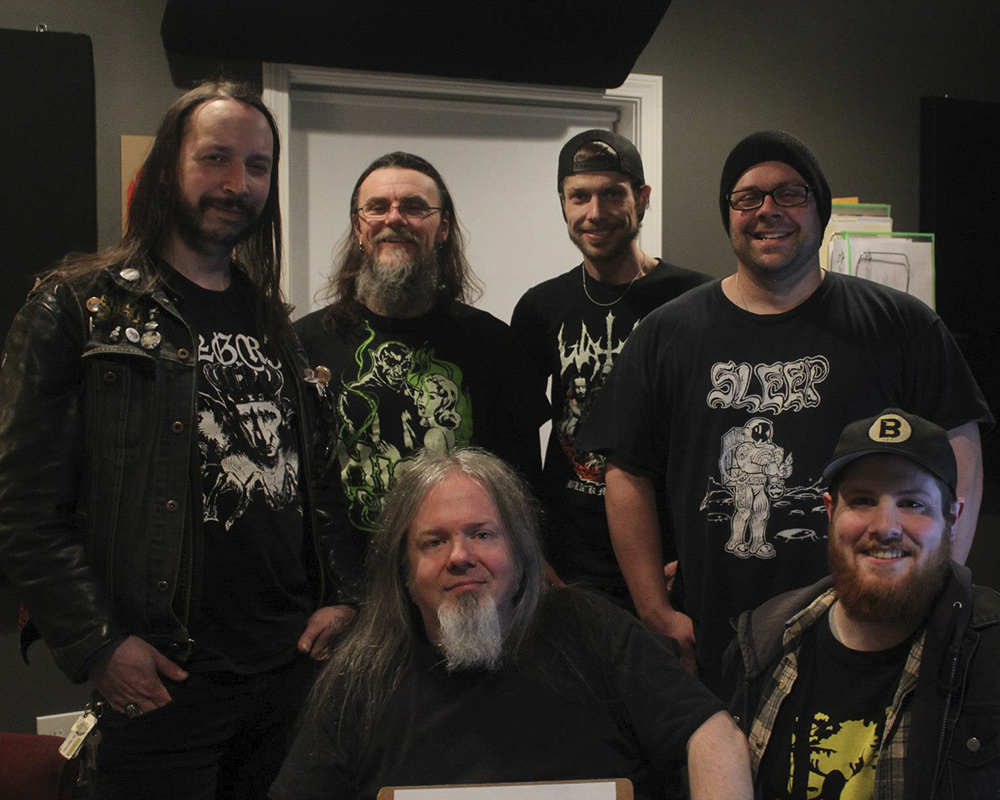 Things have been so busy here at Garage Mahal Recording Studio that I have neglected this blog for a while. Sorry about that, but at least it’s for a good reason!

So to get caught up, in February we were host to Eastern Spell. Eastern Spell is a relatively new band, sort of a super-group, formed by members of Ghosthunter, Hessian, Shabti, and Paige Turner, and play metal very much in the stoner/doom camp. Songs are long, tempos slow (with the exception of some bludgeoning middle sections), and the vibe is very dark. Vocalist Chris Corrado helps them stand out from the pack with a more hardcore vocal style a bit reminiscent of Roger Miret from Agnostic Front. They were coming in to record tracks for a split with another Portland band, Sylvia.

The plan was to set up and get sounds in the evening on friday Feb 8th and record all day on Feb 9th and 10th. Mother Nature had other plans, though, as I’m sure you all recall the blizzard that weekend where we got 30-plus inches of snow.

Showing their determination, the guys showed up on the 8th to load in as the snow started to deepen. Drums and guitar amps were set up in the main room, while the bass rig was placed in the large booth. (Patch thru’s between rooms permitted bassist Denis to play in the main room with the rest of the guys.) Surprisingly, leakage between the drums and guitar amps was minimal, due to good baffling and the figure 8 patterns on the guitar amp mics (Cascade Fatheads with the null points pointed right at the drum kit.)

Once sounds were approved as appropriately crushing, and a problem with the cueing system was run down, the guys departed for the evening, with every intention of returning the next day. Their van, however, barely made it out of the parking area and into the street, the snow was already THAT deep.

Next day we awoke to multiple feet of snow on the ground, and a quick stroll outside revealed drifts close to hip-deep. Once everyone was up and on the phone, it became painfully apparent that the day’s session would have to be canceled, though recording could resume the next day.

Sunday was much more productive, as basic tracks were laid down, along with guitar and bass overdubs. Now that the project was a day behind, completion was spread out over various tuesday evenings and sunday afternoons for the next few weeks, while vocals and a very pretty acoustic guitar outro were recorded. Eastern Spell proved to have a very collaborative creative process, with everyone offering their two cents and nobody’s ego getting in the way. A very refreshing way of working, as studio sessions can get a bit tense at times.

The end of the sessions found us with some time left over, so the band decided to blow through 3 tracks all live in the studio (including vocals.) these tracks will be used for something at a later date.

Once recording was completed and mixing style was discussed, I was left to my own devices to start the mix process. I’ve found that, since 75% of mixing is quite boring, it’s most productive if I do most of the mixing by myself and send mp3’s to the band members for feedback and whatever changes they request. After 2-3 rounds each, the guys were happy and came down for one final listen before completely approving the tracks. They even presented me with a really nice card and hand-written note thanking me for all the hard work, which meant a great deal to me. It’s nice to be so appreciated.

Tracks were uploaded the next day to the Mastering Engineer, none other than Steve from Today Is The Day. A few days later I heard the final product and Steve did an excellent job, adding to the overall heaviness. Apparently he’ll be mastering the Sylvia tracks as well.

Overall it was a great experience. The guys from Eastern Spell were really easy to work with and have a very engaging and distinct sound. Hopefully I’ll be working with them again, and you can listen to one of the tracks they recorded here at the link below:

stay tuned for updates with Covered in Bees and The Skastitutes!