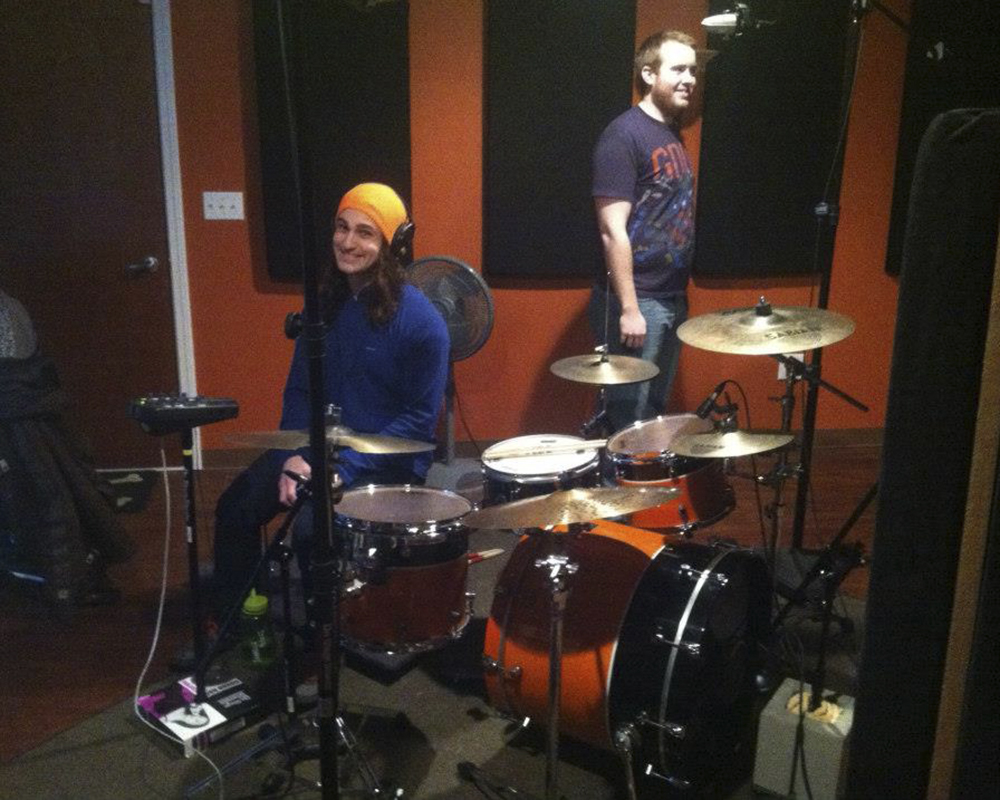 A while back I was contact by a friend of an existing client about recording his band, The Skastitutes. The Skastitutes are (obviously) a ska band from up in Orono, Maine. (The guys in the band all attend Umaine Orono, in fact.) They were interested in recording a 4-song EP for a Spring release leading up to shows over the Summer. Interestingly, I first cut my teeth at a recording studio in NYC working with jazz and big band material, so of course I jumped at the chance to re-hone old skills in the horns recording department.

I like to be prepared in advance, and my usual modus operandi is to drop in on an upcoming client during rehearsal to listen to their material, check out their gear, and make some notes. Due to the distance between Orono and Portland, however, this was not do-able. I’d have to record them pretty much sight unseen. They had at least given me some advance info about the lineup: guitar, bass, drums, trumpet, trombone – the classic ska setup. The guitar player, Nolan, was also the lead vocalist.

Given this info, I decided to record all the instruments simultaneously, with drums and horns in the main room, and the guitar and bass amps each in their own booth. All five players were in the main room so as to not lose that all important interaction and eye contact. Go-bos were set up between the drums and the horns to minimize leakage. Drummer Tom discovered a problem with his drum throne that made it unusable, so we improvised a solution: a spare stool was raised up on 2x4s and a piece of plywood, and we were ready to go.

Once the fellas strapped in and cranked up, I was pleasantly surprised to find them to be very well rehearsed and quite dynamic. (Probably from all the gigs they play.) Vocals were overdubbed later, so it was great hearing the guys swing instrumentally. The improvised drum throne did not appear to slow Tom down at all. The horns (Sean and Mark) were particularly impressive, loaded with soul. Once again, my Cascade Fathead ribbon mics did not disappoint on the horns. I’m finding them to be quite versatile.

The first two days were spent on basic tracks, and being very dedicated to getting things just right, the guys did multiple takes. Day three was for vocals, various overdubs, and “fixes”. As Nolan and Sean laid down the vocals, I got a clearer picture of the songs overall, and truth be told, the songs themselves are as good as the band, with strong vocal melodies and colorful lyrics. Bassist Kyle did some touch-up here and there, as did Sean and Mark, as well as each laying down a fiery solo on “Days Are Numbered”.

We finished up the sessions just in time, as the guys had used up their spring break for the recording, and then had to return to school in Orono. After a few days break from the project, I started mixing. Driving around with the in-progress mixes was great, the music being so uplifting and positive. As I completed each song, I sent mp3s to the band members for changes/feedback.

The resulting comments showed a bit of a divide between my preferences and theirs: while I regard Ska as a very drums & horns heavy style, with the guitar supporting in the background, the guys in the band wanted the guitars up front. Since the guitars and the horns tend to fight over the same sonic space in the mix, finding the balance they wanted was a bit tricky, but i think i nailed it pretty good. (I did give them the advice to not to push the guitars any further, which they agreed to.) In the end, everyone was happy.

Mastering was handled by local mastering engineer Pat Keane, and the band requested one revision to get the bottom end just right. The end result is a well balanced and dynamic recording.

Now that the tracks are completed and available for download, I can say it was a great and challenging experience. Apparently a few of the Skastitutes were in another band that recorded at another studio a few years back, and it was a less than thrilling experience for them. Apparently the engineer insisted recording in ways that were not comfortable for them. Since I pride myself on NOT doing that, I feel quite vindicated. Whatever is comfortable for the client is the best way to record them. I think in the end it shows in the great performances and recording.